I’m sure a lot of you have either received information or heard that a group of economists determined that the recession actually ended over a year ago, in June 2009.  I received a CNN Breaking News report in my e-mail, opened it up, read it, and my jaw dropped.  I’m thinking, “Are you kidding?”  If that’s the case, why is unemployment rates still on the rise, foreclosure signs up everywhere, and people struggling to make ends meet? 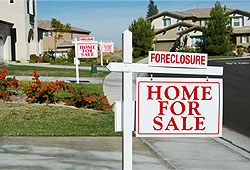 So after the reports that the recession was over (ha!), even stocks jumped up.  The Dow closed up 122 points yesterday.  Anybody else notice short sale and foreclosure signs popping up everywhere in neighborhoods?  Me, too.  People are abandoning ship because of an inability to cover monthly expenses, whether related to a job loss, debt to cover basic living expenses, or other reasons.  I know one family that’s unsure of what to do because they applied for a loan modification with their lender, were denied, and now owe $8000 plus in unpaid principal to be current on their loan.

Dan North, chief U.S. economist with Euler Hermes, a leading credit insurer in Owings Mills, Md., said, “The economy and housing market may have bottomed out but that doesn’t mean things are good.  Foreclosures and underwater mortgages are still a big problem because of the absence of meaningful price appreciation.”

Home values are still way down compared to a few years ago.  Inventory is up, with a lot of it being bank-owned homes with decreased values, thereby pushing the rest of the home values down.  And in an almost Catch 22, why is inventory up?  Because banks are reluctant to loan money to borrowers unless they have a high down payment and excellent credit scores.  Just because you qualified for a loan 2 years ago doesn’t mean you will in today’s market.  And even if you have the money and the credit score to go with it, if you’re focused on other debts to tackle, do you want to take on a huge additional expense like a house?

I just picture a lot of unhappy people throwing things at the TV when they heard this news.  They’re thinking the same thing I was.  “Are you kidding?  I’m still unemployed with thousands upon thousands in debt about to lose my house and you think the recession is over?”  And not JUST over.  Over a year ago over.

I think Americans could use some positive news.  Some good news: mortgage interest rates are down.  The amount of home sales went up in July.  (We’ll hear how August fared later this week.)  However, I think we still have a while to go before the majority of people believe the recession’s over, especially in the housing market.

What do you think?  Am I totally off base?  Leave me a comment or visit me online.